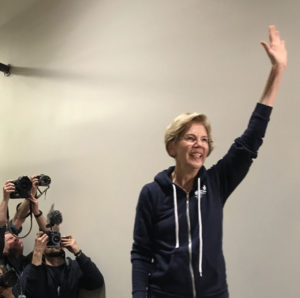 DES MOINES — At 10:30 on Friday night, Democratic presidential candidate Elizabeth Warren spoke to a packed brew pub in Des Moines. Warren’s been serving as a juror in the U.S. Senate’s impeachment trial all week and she began by thanking the congresswomen who’ve been campaigning for her in Iowa.

“They prove kick-ass women win!” Warren said, pumping her fist in the air as the crowd cheered.

Some in the crowd arrived five hours earlier for a Warren campaign get together. Other joined after hearing Warren hopped on a plane in D.C. when the Senate adjourned Friday and was headed to the gathering. Warren pointed out campaign staff in the room who had sign-up sheets for door-knocking volunteers this weekend.

“There is no one I would rather be in this fight with than you because this is the moment, that we will dream big, fight hard and win,” Warren concluded, as the crowd joined in at the end to yell the familiar ending to Warren’s campaign speeches.

Warren spoke briefly before starting a selfie-line, thanking Iowans for pushing her as a candidate with pointed questions as well as examples of the personal impact of public policies.

“Over this year, you’ve made me a better candidate and you’ll make me a better president,” Warren said, to cheers.

Emily Villaume, sitting at the bar, about 20 feet from Warren, wiped tears from her eyes as the senator finished speaking.

“I’m just so happy that someone believes in optimism. It’s just so nice to see,” said Villaume, who’s from Chicago and in Iowa this weekend, knocking on doors for Warren.