Weather Alert
FROST ADVISORY in effect until 8 AM CDT this morning for Mitchell, Floyd and Mower MN
KGLO News

DES MOINES — The floor of the State Historical Building in Des Moines has served as a landing zone this week for historical airplanes that have hung on the ceiling for decades.

Iowa Department of Cultural Affairs spokesman Michael Moraine says the planes are being taken down for renovation work on the building and it’s interesting to see them up close at ground level.  “The engines in them are about the size of a lawn mower. They are a couple biplanes and their wings are made of canvas. They look pretty rickety and you just think somebody was either really brave or really insane to get these things off the ground,” Moraine says. “But there are fascinating stories about how these planes flew over Iowa a century ago.”

He says two of the planes have come down and a third will soon. “It’s been a fascinating slow-motion drama,” Moraine says. Specialists from Methods & Materials of Chicago are handling the work to bring the planes back to earth.

“They are very precise, they’re engineers and they know how much everything weighs — and if you cut this cable then it’ll tip this way. But they are doing everything very deliberately.” He says the company is the same one that moved massive sculptures in the park in downtown Des Moines.

Moraine says they’ve brushed some of the dust that’s accumulated on the planes in 23 years of hanging and will move them out of the way while the renovation work is done. “Some experts will take a look at them and sort of assess what sort of care they need. But in the meantime, we will disassemble them and store them in custom-made crates and tuck them into a museum gallery that is closed right now, according to Moraine. 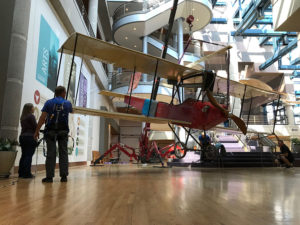 Almost on the ground.

He says the work will replace a leaking ceiling that has plagued the building and often required buckets to be set up. “If you’ve been here there’s a series of pyramid skylights that have been problematic. Water has gotten in and dripped in the atrium, he says. “So this project will replace parts of the roof and all of those skylights just to make the building more watertight and to make it safe for historic artifacts and to make it a better experience for visitors.”

Moraine says the building will be open during the renovation and he encourages you to stop in. The moving company will also move the giant globe that sits in the atrium and he says that should be interesting to see. One of the movers from Methods & Materials will be on hand next Tuesday (October 1st) for a noon program discussing how they handled moving the planes and other items while still protecting them.

The building renovation is expected to last through next summer.

Iowa turns down 71% of available vaccines on weak demand

Mason City woman accused of bilking church out of $274,000