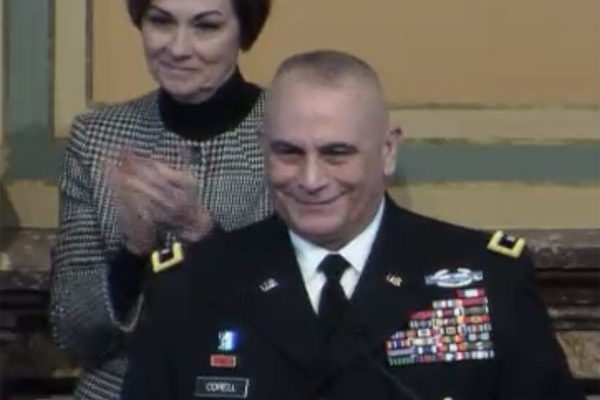 “Over the past years the number of federal mobilizations have been relatively light. This will change in the next couple of months — as a number of Iowa Army National Guard Units will mobilize and deploy, Corell says.  General Corell says there are currently around 100 soldiers and airmen deployed overseas.

“By this time next year — we expect to see over 2,000 Iowa National Guard members deployed overseas,” Corell says. “They will in support of operations in the European Command, the Central Command and the Africa Command.”

Corell says it has been almost ten years since this many guard members were activated for federal duty. “This will be the largest number of our personnel deployed since 2001, involving nearly 30 percent of our Iowa National Guard force structure,” according to Corell. “Based on projections, these mobilizations will begin this may, they will continue through this summer, and will complete the mobilizations by this summer. Mission requirements can and do change — but this is what we are currently expecting.”

Corell announced the deployments during the annual state of the National Guard address Thursday to the Iowa Legislature. “I recognize the challenges that these deployments represent for our service members, their families, our employers and our Iowa National Guard communities. We have always been fortunate here in Iowa to have incredible support across this state,” Corell says. “We are reassured by our previous experiences as the Iowa National Guard once again prepares to send soldiers and airmen into harms way.”

General Corell did not identify in his speech the specific units that will be deployed.