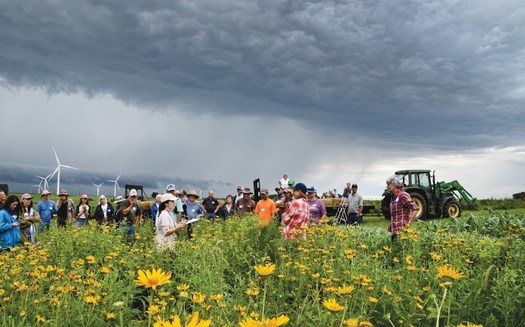 Some political observers might think climate change is an issue more important to voters in coastal areas. But according to the Center for Rural Affairs, 91% of respondents to a recent survey said they were either “very” or “extremely” concerned about climate change affecting their lives.

Kalya Bergman, policy associate with the Center, said the participants were rural Iowans of all backgrounds.

“Educators, farmers, business owners, parents and all other backgrounds, and they’re all concerned about and willing to take steps to address climate change,” Bergman said.

Climate researchers say Iowa has seen the largest per-decade increase in annual average rainfall at more than 1 inch of precipitation. Bergman said the flooding from the higher rainfall totals is a direct threat to the more than 1 million people living in rural Iowa, where a lot of food and energy is produced.

Kevin Griggs runs EOR Iowa, an environmental engineering and consulting firm. He said he believes the state is on the front lines of climate change. And he’s seen it first hand through the work his company does.

Unlike recent presidential elections, some of the Democratic hopefuls in 2020 have taken notice of voter concerns in Iowa. That includes TV ads that focus on the Green New Deal, or fielding questions about the topic during forums.