DES MOINES — The “applause meter”at a weekend event in Iowa illustrates what appear to be new contours in the race for the Democratic Party’s 2020 presidential nomination.

Cheers, applause, whistles and some cowbells rang out from the crowd as Polk County Democratic Party chairman Sean Bagniewski announced 12, 242 people were in the “Steak Fry” audience Saturday afternoon.

Warren’s steady push to the top of the Iowa Poll appears fueled by the dogged footwork by her paid staff and volunteers throughout the state, along with a policy-heavy campaign platform.

“I know what’s broken. I know how to fix it and we’re building a grassroots movement to make it happen,” Warren said to conclude her speech Saturday at the Steak Fry.

The crowd that punctuated her speech with cheers recognized Warren’s signature lines.

“I’ve got good news,” she said, drawing a big crowd response midway through her 10 minute address as she discussed climate change. “I’ve got a plan for that.”

Former Vice President Joe Biden — the front-runner in national polls — sits two-points behind Warren in the new “Iowa Poll.” The biggest applause line in Biden’s speech to the Steak Fry crowd came shortly after he took the stage.

“The stakes are only getting higher. Above all else, we must defeat Donald Trump, period,” Biden said. 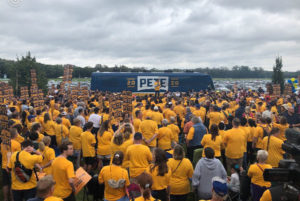 South Bend, Indiana Mayor Pete Buttigieg brought the Steak Fry crowd to its feet at one moment in his speech.

“Are you ready to leave behind the reality show in Washington and change the channel to something we can all be proud of?” Buttigieg asked, prompting his supporters in the crowd to chant his name.

“Are you ready for a political revolution?” Sanders asked, getting applause and cheers as he started his speech.

The Steak Fry was a day-long event for many, with campaign signs plastered throughout Des Moines Water Works park and some candidates hosted rallies on sites outside the Steak Fry space. California Senator Kamala Harris and her supporters marched into the Steak Fry with a popular Des Moines drum and drill team. From the Steak Fry stage, Harris laughed as people in the crowd started shouting her signature line about President Trump before she uttered it.

Minnesota Senator Amy Klobuchar joked she volunteered to speak as misty rain started falling, a reference to her campaign kick-off speech during a Minnesota snow storm. Klobuchar then emphasized supporting Democrats up and down the ticket.

“I need everyone’s help with my campaign because we’re not running an individual campaign,” Booker said. “We will win this election not by dividing Democrats, but by having people that unite us and bring us together.”

The Iowa Poll found four-out-of-five Iowa Caucus-goers have not settled yet on a candidate. Tim Lane of Des Moines was walking through the Steak Fry crowd seeking nominating signatures for a local Democratic candidate and he is among the undecided.

Teresa Keenan of Atlantic had narrowed her list down to three candidates when she got to the Steak Fry.

“And they will make America great,” Keenan said, with a laugh. “They’ll bring back sanity.”

Gerald Beau of Maquoketa has a list of three candidates he thinks would be good nominees for the party. He’s hoping the race doesn’t get nasty.

“We don’t need to be attacking fellow Democrats,” Beau said as he walked near the Steak Fry venue.

Trent Kutchara of Council Bluffs has narrowed his choices down to Warren and Sanders from a field he suggests is a bit too crowded.

“It’s been a lot of noise so far,” Kutchara said Saturday. “Not noise in a negative connotation, just because there’s been such an abundance of people. It becomes clear early on who’s going to make it and who’s not.”

Dan Corsair of Indianola is considering Booker and Buttigieg.

“I’d like to see a little bit of a change in direction,” said Corsair, 73, who wore a t-shirt from Booker’s campaign for the day. “I’d like to see younger blood come into the White House.”

Ann Andrews of Sidney is surprised to see so many of the candidates in person. She and her husband recently moved to Iowa from Seatlte, Washington.

“This is the first time we’ve been involved in the whole Iowa thing and it’s just amazing to us,” Andrews said at the Steak Fry entrance. “We just didn’t think that Iowa had Democrats.”

The next big gathering for Iowa Democrats will be the party’s fall fundraiser on November 1st. It’s to be held at Wells Fargo Arenda, the largest indoor venue in Des Moines.

Reynolds close to filling vacancies so public health board can operate