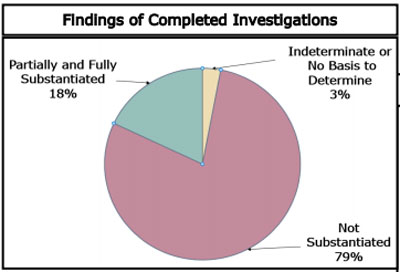 Ombudsman Kristie Hirschman says they had 5,406 contacts during fiscal year 2019 — an increase of seven percent. “Everything in all categories just seems to be increasing,” she says. She says one area did stick out a little more than others. “The only clear significant increase as far as categories of complaints is from jails,” according to Hirschman. “We know the jail populations are increasing. And our office has been saying for years that jails and prisons have become the warehouse for the mentally ill.”

The office saw 30% more complaints about jails and prisons. “The top five complaint categories for jails are: health services, discipline, staff conduct, food and conditions and confinement,” she says. Hirschman says a lot of the medical complaints involve medication that can’t be resolved. “They believe they are not getting medications or appropriate health care treatment. Part of that is there are medications not allowed in the prison system in certain situations — especially medications such as narcotics,” Hirschman explains.

Hirschman says she continues to have concern about the complaints generated about governments. She remains frustrated with transparency in all levels of government.  “In general from a big picture perspective — I think that agencies need to strive to be more transparent. — err on the side of transparency rather than secrecy,” according to Hirschman.

Hirschman says one thing the public needs to do is look for all avenues where they can settle an issue before having to call her office. “If that is available to them, then we will decline the compliant until they have exhausted the process,” Hirschman says. “Even for example is somebody calls and says ‘the city won’t pay for my street.’ And then we ask them if they have brought their concerns to the attention of the city council. And if they say ‘no’ — we are going to ask them to bring their concerns to the appropriate governing body before our office gets involved — just because we get too many complaints.”

The complaints brought to her office in the 2019 fiscal year ended with 79 percent being unsubstantiated, three percent undetermined or no basis to determine, and 18 percent partially or fully substantiated. Hirschman expects the complaints about local governments to continue to increase as a new law promotes the Ombudsman as a place for employees to report fraud and waste.

The report can be found online at www.legis.iowa.gov/Ombudsman.