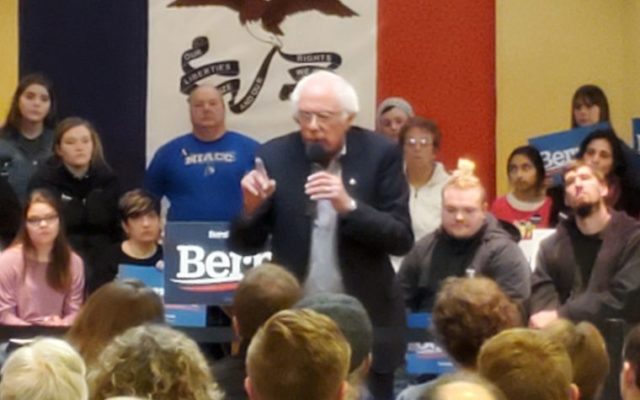 MASON CITY — Healthcare was the main topic addressed by Bernie Sanders during a stop in Mason City on Saturday night.

Sanders says Medicare for All would help people who want to retire but can’t because of the need for affordable healthcare coverage. “There are millions of workers in this country who are staying on their job, not because they enjoy the job, not because they want to stay, they stay because they have decent health insurance for their families. That is pretty pathetic. When we talk about Medicare for All, it means you don’t have to stay on a job you don’t want. If it’s time for you to retire, you retire. If you would like to start your own small business, you can do it because you and your family will continue to have health coverage.”

Sanders says under his plan, individuals and employers would no longer be paying insurance premiums, co-payments, or other out-of-pocket expenses while getting comprehensive healthcare.  “What we propose is a 4% tax on income, exempting the first $29,000. That means if you’re $29,000 or less, you don’t have to pay anything. If you are that average family in the middle of the economy, $60,000 a year, you’re paying 4% of $31,000, that’s a little over $1,200 a year for comprehensive healthcare.”

When asked by a man in the crowd about the current tensions between the United States and Iran, Sanders replied that President Trump is showing that he is not a quality world leader.  “Trump campaigned on ending endless wars, and yet I feel very much that his actions right now are going get us into another war, trillions more dollars perhaps, loss of more lives of Americans and other people. It is not sexy, it does not make the front pages of the papers, but what a good president does is tries to bring Iran and Saudi Arabia together, tries to bring Israel and the Palestinians together.”

According to a CBS/YouGov poll released on Sunday, Sanders along with Joe Biden and Pete Buttigieg were tied at 23% by Iowa Democrats’ asked who was first choice for their nominee.