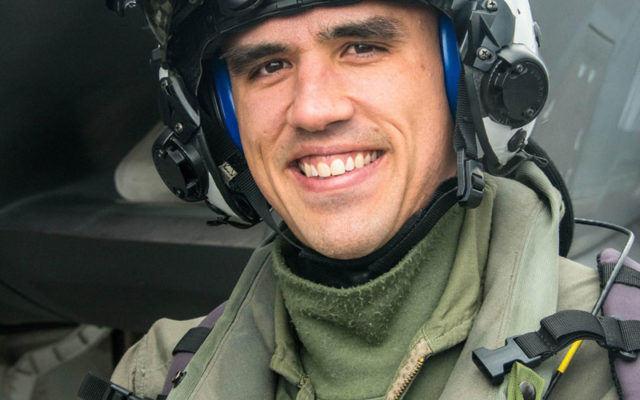 MIAMI GARDENS, FLORIDA — A Sac City-native and U.S. Marine Corps Major, Adam Wellington, was at the controls of one of the jets in the military flyover at the Super Bowl in Miami on Sunday.

The 37-year-old pilot graduated from Sac Community Schools in 2001 and joined the Marines after graduating from the University of Iowa in 2005. Wellington says he was lucky to be chosen to be one of four pilots be involved in the flyover.

“Basically these things get source to higher headquarters…and they trickle down. Eventually the squadron that I’m in — which is VMF-AT-501 out of Beaufort, South Carolina — that squadron got tasked by the Marine Corps to support with an aircraft,” Wellington says, “and I just happened to be lucky enough to be the guy that the squadron chose to go down and fly.”

Wellington started flying the F-35B in 2015. Prior to that, he flew the F-18 Hornet, including deployments to the Middle East in 2012 and 2014 and two, three-year deployments stationed in Japan.

Wellington’s mother Annette Wellington of Sac City, says her son has dreamed of becoming a pilot since elementary school, and everybody in the Wellington family was thrilled to see him fly on national television. Annette says the toughest part is her late husband and Adam’s father, Don, won’t be with them to watch the flyover.

“I lost my husband in 2018. And he would have been so proud to watch him on TV flying that jet. That’s one of the sad things — buy you know he’s watching him from heaven,” she says. Sunday’s flyover occurred prior to kickoff. Wellington and the other pilots then landed at a nearby airfield and headed back to Hard Rock Stadium to catch the halftime show and second half of the game.

He says being a part of the spectacle of the Super Bowl just adds to the great career he has. “It’s always been a lifelong dream of mine to fly. The Marine Corps gave ma an opportunity and it worked out and it’s been great ever since,” Wellington says.