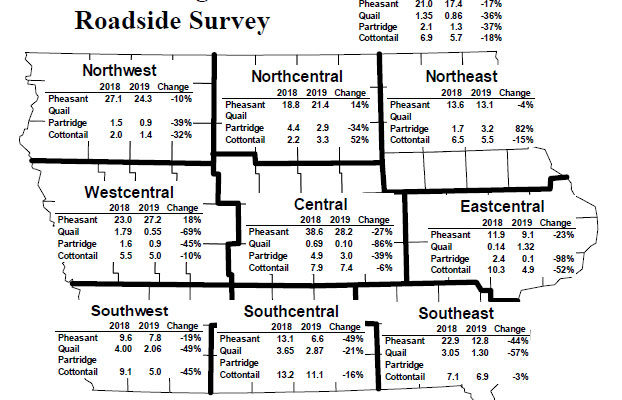 DES MOINES — The results of the Iowa Department of Natural Resources survey show there will be plenty of pheasants available when the season opens in October.

DNR wildlife biologist Todd Bogenschutz, oversees the survey and says the numbers didn’t crater despite some rough winter and spring weather.  “Yeah they are down a little — but I think it could have been a lot worse. I think we even had a couple regions that showed a slight uptick,” Bogenschutz says.

The August roadside survey showed an average of 17 pheasants per 30 mile route, down from 21 per route last year. But he says two areas caused the overall average to drop. “The south-central and southeast had a lot of ice down there last year and of course they had an abundance of rain in May. So the counts are way down in those two regions — 40 to 50 percent — and that kind of drove our overall statewide number,” Bogenschutz says. “The rest of the numbers are up a little, down a little, none of them significant.”

The west-central region saw an 18% increase in pheasants and the north-central region saw a 14% increase. He says seeing the roadside count numbers close to last year is a win for hunters. “Last year was our best year in ten years — so that’s pretty good I think,” Bogenschutz says. The pheasant numbers have been building back up after several years of decline brought on by bad weather.

While the birds will be available, he says the hunting conditions are going to make it more difficult to find them. “Because crop planting was so late this year there it’s probably a high likelihood on our opener that most of the crops are going to be standing. And that’s going to make for a tougher opener because bills will have a lot of cropland they will be able to move off to and basically you won’t be able to hunt them,” Bogenschutz explains.

He says acres of standing corn make a great place for birds to hide. “All the birds — especially when the season opens at the end of October — I mean they are using the crop fields as things are maturing they are starting to use them as a food source and are in them anyway. And a little bit of hunting pressure and they are going to figure out quick that’s the place to be so they won’t be bothered,” Bogenschutz says. “I fully expect because of how far behind the planting season was this year we’re going to have a lot of crops the opener.”

He expects hunters to take around 200,000 roosters again this year — but says that could be much higher if more hunters went out. “Fifteen years ago we had 100,000 hunters and last year we barely broke 50 (thousand). Our harvest is partly driven by how many guys get out there and chase them. Our hunter numbers have been slowly creeping back up, they had gotten down into the 40-thousand range,” Bogenschutz says.

He says the number of birds taken could more than double if more hunters hit the fields. “If we had the hunters we had 15 years ago I think our harvest last year would have been half a million. I think the birds were there,” Bogenschutz says. The pheasant season will open up on October 26th.