MASON CITY — The City Council in Mason City this week approved the placement next spring of a memorial sculpture honoring late councilman Alex Kuhn on the north side of the circle drive at the main entrance into the city’s public library.

The sculpture depicts Kuhn reading to his sons. A 72-inch by 20-inch bench is occupied by life-sized bronze representations of Kuhn and one of his sons. Facing the bench is a sculpture of Alex’s other son perched on a basketball. Two additional benches of the same dimensions to create a gathering place for young people and other patrons of the library to share their love of reading.

Councilman John Lee says Kuhn’sparents a few years ago came up with the idea with a memorial to their son, and community members have stepped up with donations to fund it.   “Over 400 people in the community, and outside the community, have donated their time and energies, and just looking at who is also going to be part of it, we have three businesses in town are doing in-kind donations to lay this in next spring.”

Councilman Paul Adams says it’s a fitting tribute for Kuhn’s service to the community.  “I never had the chance to serve with him on this side, but I saw the work he did sitting on that side, not only his work for the city but the work inside the schools with literacy program and everything else. I look forward to the springtime when I believe Mr. Kuhn told me that they will be installing it, and once again it should be a fitting tribute to his service.”

An interpretive element discussing the life of Kuhn, who died in 2016, will also be part of the memorial.

City code requires approval of any placement of public art such as this by the Planning & Zoning Commission and the City Council. 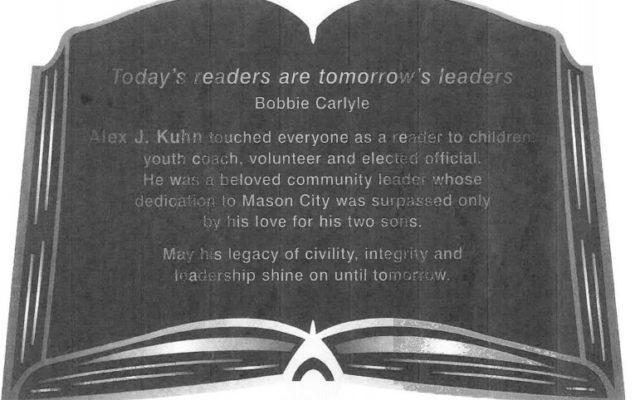