FORT DODGE — After more than five decades of collecting rare rocks, a self-taught geologist from Fort Dodge recently donated the thousands of fossil specimens he cataloged in his garage to the University of Iowa.

Sixty-four-year-old Robert Wolf says he got interested in fossils very early on.

“I was in 4th grade and a friend of mine showed me a fossil he found in his driveway of crushed rock,” Wolf says. “I didn’t know anything about them and we started looking in the field between the two houses and found a few fossils.”

Wolf started studying fossils and essentially never stopped. He furthered his knowledge by joining the Geological Society of Iowa and went on field trips to dig sites around the region.

“I started numbering my specimens and before you know it, I was up to over 18,000 cataloged and a lot more than weren’t cataloged,” he says.

While he made his career as a writer, working for many years as a reporter at the Fort Dodge Messenger, Wolf says geology has always been his number-one hobby.

“A lot of it was stuff I learned out in the field and in libraries and I had an Earth Science teacher in high school who taught me a lot about it, too,” Wolf says. “Now, I’m on Facebook and I learn a lot of stuff through Facebook and people are always contacting me to have me identify things.” 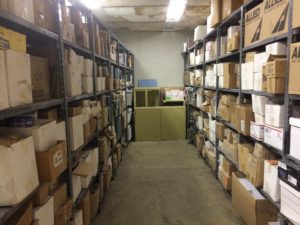 Waiting to be unpacked and numbered,
boxes of the unprocessed fossil collection
inside the University of Iowa temporary storage.

Some Iowans love to collect arrowheads, he notes, and they’ve found hundreds of Native American artifacts by roaming through the state’s cornfields and forests.

“I’ve been doing this for 55 years and I have never found an arrowhead,” Wolf says. “I think, after a while, your eyes just grow accustomed to what you’re looking for and that’s how I go about it, just trial and error.”

Wolf says one of his most memorable moments was discovering fossils from the Cambrian Era in northern Iowa.

“I’m just fascinated by these things because they’re like 490-million years old and they come on the heels of what they call the Cambrian Explosion, which was a big worldwide event where many of the lifeforms we know today first started appearing,” Wolf says. “It’s just fascinating to read this and see documentaries on it and actually be able to put my hands on that stuff right here in Iowa.”

Wolf made his comments on the Iowa Public Radio program “Talk of Iowa.”