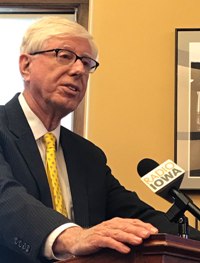 DES MOINES — On Saturday, Iowa Attorney General Tom Miller will become the longest-serving attorney general in U.S. history. Miller, a Democrat, was first elected in 1978 and has been re-elected nine times.

“I always thought that there was great potential in the office to serve ordinary people,” Miller said yesterday, “to use the law to serve the interests of ordinary Iowans.”

Miller, the son of a long-time local government official, grew up in Dubuque, graduated from Loras College and then got a law degree from Harvard in 1969.  His initial interest was in running for congress.

“John Culver was my mentor and he was a wonderful congressman at the time,” Miller told Radio Iowa, “and a series of events diverted me towards the AG race and I’m sure glad it happened that way.”

McGregor was where Miller was practicing law and he was renting office space and an apartment in a building Culver owned. After serving three terms as attorney general, Miller unsuccessfully ran for governor in 1990, then sought re-election as attorney general in 1994.

“Maybe, probably it worked out better that I’ve had this long tenure as attorney general as opposed to being governor,” Miller said.

Miller breaks the national record of Michigan’s attorney general who left office in 1999 after serving 37 years and five days as that state’s top lawyer. As of today, Miller has been Iowa’s attorney general for 13,518 days. Miller has argued two cases before the U.S. Supreme Court and rates his work on the national settlement with tobacco companies as some of the legal highlights of his tenure. Miller also cites his work with the Iowa Bankers Association during the Farm Crisis on a state law that required mediation on all farm foreclosures.

“Some farmers could pay some, but not all of what they owed under their mortage. Creditors, getting that amount that the farmer could pay, would be more than they could get by foreclosing and selling on a very difficult market and mediation was the vehicle to comprehend that and reach the right dollar amount to make that work,” Miller said. “We think that was really important in lessening enormous harm and suffering in the Farm Crisis.”

“You know I’ve opened the door, at least a little bit,” Miller said. “I think it’s quite possible this is my last term, but I’m going to at least think about that a little bit more down the road here.”