DES MOINES — Former Iowa Senator Tom Harkin — a Democrat — Friday said you “can’t fault” the Republican leader of the U.S. Senate for using his political power to get dozens of conservative judges confirmed since President Trump took office, but Harkin said Democrats need to “play hardball” when they’re in power to place progressives on the federal courts.

“Now we’ve got to come back and impress upon our candidates who are running for president that this shouldn’t be a throw-away issue,” Harkin said. “It ought to be front and center.”

Harkin has been an advocate of more diversity in the courts, beyond filling judgeships with Ivy League graduates and corporate lawyers. Harkin is urging Iowans to push the presidential candidates on this issue.

“You’ve got to get them to start talking about this,” Harkin said, “and in a way that says: ‘Look, if I’m president, I’m going to have a judiciary that really reflects the working people, people that don’t hire big corporate lawyers, that don’t have deep pockets — but lawyers that understand justice has to apply to the poor as well as to the rich.” 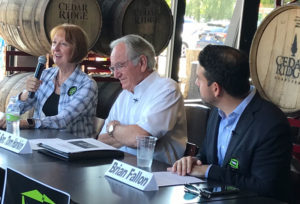 Harkin spoke Friday at an event near the state capitol that was organized by Demand Justice. It’s a relatively new group that last week began running online ads in Iowa, New Hampshire and South Carolina urging the Democratic presidential candidates campaigning in the early states to release a list of potential Supreme Court nominees — like Trump did in 2016. The group is also pushing the candidates to consider ideas like term limits for judges.

Brian Fallon, co-founder of Demand Justice, said without changes, the courts “will be in Republican hands for 30 years.”

Iowa to get $1.48B in federal coronavirus assistance money