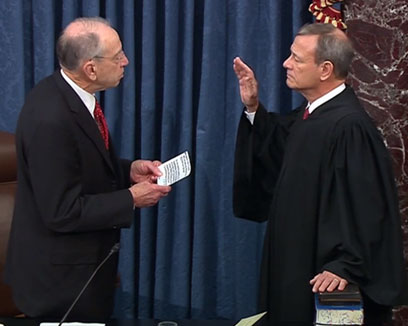 WASHINGTON — As the impeachment trial of President Trump begins this afternoon in the U.S. Senate, Iowa Republican Chuck Grassley say he has no inkling how long the proceedings may last.

A resolution was passed to shorten opening arguments to two days per side, so it’ll be four days just to launch the trial. The senator-jurors have been warned, there are explicit instructions that must be followed during the trial, like no trying to sneak peaks at their smartphones. Violators could face arrest by the sergeant at arms.

“I do see the rules being very strict about electronics and about being at your desk,” Grassley says. “I suppose that would not preclude bathroom breaks for individuals. Beyond that, I think everybody’s going to take this very serious.”

During the impeachment trial of President Clinton in 1998, Grassley recalls the only disruption he was directly involved with was when a House member, sitting in front of Grassley, accidentally knocked over a glass of water with his elbow, soaking Grassley. With this trial, there continues to be debate over the witness list.

“It’s contentious today as there will be efforts of senators on the Democratic side, led by Schumer, to ask for witnesses ahead of time,” Grassley says. “That’s going to be controversial, but with 51 votes, I’m sure those motions are going to be tabled.”

Senator Grassley is the President Pro Tempore of the Senate and in that capacity swore in Supreme Court Chief Justice John Roberts last week so Roberts can preside over the trial.

The trial is scheduled to start at noon/Central time and it will run six days a week, only taking Sundays off, and may feature 12-hour days.