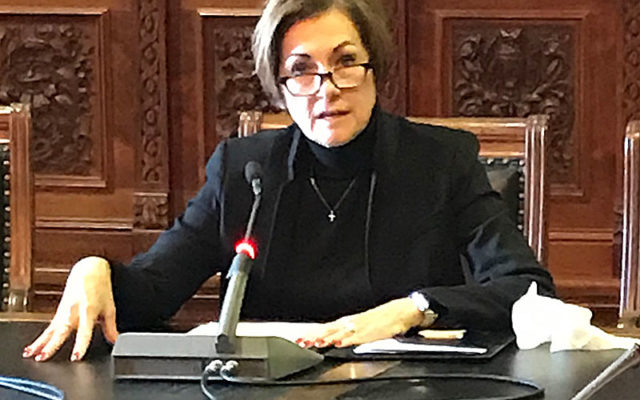 DES MOINES — Governor Kim Reynolds will deliver the annual “Condition of the State” message to the Iowa General Assembly later this morning, the third year she’s done so.

Reynolds offered a bit of a preview a week ago at a statehouse forum organized by The Associated Press.

“We have a diverse and growing economy, even with some significant challenges, but I’m proud to say that Iowa is in growth mode,” Reynolds said. “We have one of the lowest unemployment rates in the country, more Iowans working today than at any time in our state history.”

This past summer, Reynolds indicated finding new ways to improve access to quality child care, particularly in rural Iowa, would be a priority issue for the 2020 legislative session. She’s been non-committal about what plans she may have when it comes to tax policy.

“Stay tuned,” Reynolds said last week, laughing. “…We’re looking at all of it.”

Reynolds has met privately with groups to discuss revamping the way the state might allocate new revenue if the state sales tax was raised — and a constitutional amendment requires a portion of that money be spent on water quality and outdoor recreation projects.

“We’ve worked very hard to incorporate or hear from anybody who has ideas or interest in addressing that,” Reynolds, a Republican, told reporters last week.

Reynolds and Republican leaders in the legislature have repeatedly said if the sales tax goes up, it must be part of a package that winds up lowering the total amount of taxes the state collects.

Reynolds is scheduled to begin addressing the Iowa General Assembly this morning shortly after 10 a.m. You can hear live coverage of the governor’s address on AM-1300 KGLO as we’ll join coverage from Iowa PBS starting at 10:00 AM