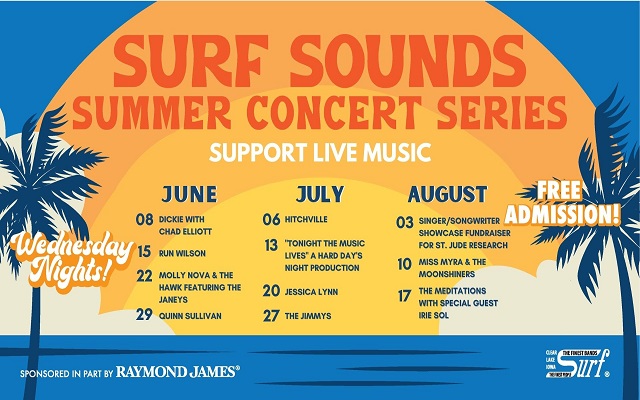 Sponsored in part by Raymond James, this is a free series with donations for the Surf Ballroom & Museum’s Education and Outreach facility, the Music Enrichment Center, accepted in lieu of admission.

The Surfside Hospitality Group’s new neighboring restaurant, the Legacy Grill, will be available to order from during the series. The menu will feature a diverse selection of American classics with a side of live music.

On Dickie’s self-titled release, singer-songwriter Dick Prall took a succession of personal losses and nestled them inside a beautifully-layered soundtrack. And equal to his songwriting, it’s never certain what Prall will offer up for a live performance, but it’s guaranteed to leave you with the reminder that music can make a beautiful lasting impression, and will continue to bring you back. Accompanied by Dickie will be midwest singer-songwriter Chad Elliott. He blends folk rooks, swampy blues and soulful writing to deliver an original Americana sound.

Run Wilson’s unique sound is almost too broad to be considered “indie rock”. From hard hitting instrumentals, head banging live performance, and deep, rugged vocal ranges, to arpeggios and finger picked love songs, Run Wilson can truly do it all. Run Wilson consists of members between the ages of 17 and 20 years old.

This is a 5-piece band that brings together three members of Iowa’s popular “Blue Band” – Violinist Molly Nova, Guitarist Bryce Janey and Drummer Turk E. Krause, along with Corey Baker ( Guitar, Bass & Vocals) and Russ Moore (Keyboards). Molly Nova and the Hawk have many years of performances playing all kinds of music, resulting in a style of music that is all their own- original timeless music with ballads, rockers, and grooves not limited to any genre. It’s just Sweet Rockin’ Roots & Blues!

Today, 21-year-old singer, songwriter, and guitarist Quinn Sullivan celebrates a new chapter of his already impressive career, which has seen him tour the world and collaborate with rock’s biggest legends. Now, having developed genuinely jaw-dropping skills as a guitar player, Sullivan’s more recent work has been with pen and paper, as he lets the abundant skills of his youth blossom and steer him into new directions of artistry and creativity.

Hitchville has quickly solidified themselves among the upper echelon of regional talent. Under the foundational leadership of dynamic lead vocalists Heidi Owens and Matthew Kneefe, the group’s trademark harmonies, down home personalities, and kinetic stage energy leads to an unforgettable live show in which the band works tirelessly to produce. Over the past few years, fans have come to know to expect the unexpected at a Hitchville show. There’s really only one place where the beer is always cold, the people are always friendly, the music is always world class, and the energy is always palpable… they’d like to welcome everybody home… to Hitchville.

Come take in some great live music from the Midwest’s Premier Beatles Tribute Band! They will present their tribute to Buddy Holly, Ritchie Valens, JP Richardson, Dion and the Belmonts, and Bobby Vee.

Jessica Lynn is being hailed by the press around the world as a rocket force and is quickly becoming a household name. A unique face and voice in modern music, she has been seen by millions on the road and in her three full-length nationwide concert television specials. Jessica’s powerful voice and fierce stage presence showcase the muli-faceted singer/songwriter’s instrumental talents playing piano, guitar, harmonica, and the drums. With a massive social media presence and upcoming tour dates in at least fifteen different countries, Jessica’s star continues to rise and the best is certainly yet to come.

The Jimmys are an award winning, high energy 7-piece blues band featuring Jimmy Voegeli on keyboard and organ, Perry Weber on guitar, Chris Sandoval on drums, John Wartenweiler on bass and an amazing 3-piece horn section. They’re sure to get you dancing!

Songs and stories with a songwriter showcase. All proceeds go toward St. Jude Children’s Research Hospital.

Miss Myra and The Moonshiners are a formidable 5-piece swing band from Minneapolis, MN with a fresh sound grounded in early jazz and blues, playing original music amid a broad repertoire of classics from the ‘20s and ‘30s. Discontent to be re-enactors, they have developed a singular style which continues to delight audiences and dance halls with the spirit of a musical tradition and its centennial.

The Meditations’ music is Roots Reggae at its finest. The love is overwhelming and it’s an inspiring experience to see The Mediations live. As a part of the foundation of reggae music, Ansel “Meditation” Cridland has for over 40 years been producing, writing, arranging, and performing for fans all over the world. Accompanying him are vocalists Laury Webb and DaddyLion Chandell. Performing along with The Meditations will be special guest Irie Sol. Junior Williams moved from Kingston to the United States with the dream of fusing music from his home island with international and American genres. Based in the Twin Cities and Eau Claire, Irie Sol’s members hail from all over the world. They are honored to return to the Surf Ballroom in support of reggae legends The Meditations.