Rock 4 Vets at the Surf Ballroom 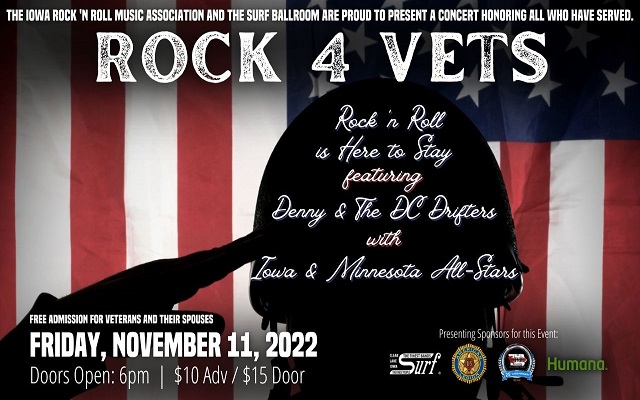 *Free admission for veterans and their spouses*

The Iowa Rock ‘N Roll Music Association and the Surf Ballroom are proud to present a concert honoring all who have served. Performing with the popular Denny and the DC Drifters are a talented group of all-star singers from Minnesota and Iowa. Jana Anderson is a nationally recognized vocalist from Minneapolis who recorded with Prince and toured with Fleetwood Mac, Stevie Nicks, Don Henley and others. Iowa Rock ‘n Roll Hall of Famers Terry Klein (Upson Downs), bassist Jerry Jones and Mason City’s Rockin’ Vance Jorgensen also are featured in the ensemble. 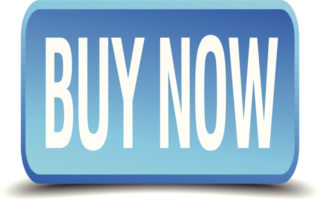 Denny & The DC Drifters with Iowa/Minnesota All-Stars to perform. Veterans and Spouses Free

(Arnolds Park) The Iowa Rock ‘n Roll Music Association and the Surf Ballroom are proud to present Rock 4 Vets “Rock ‘n Roll is Here to Stay” featuring Denny & The DC Drifters with Iowa & Minnesota All-Stars on Friday, November 11 at the historic Surf Ballroom in Clear Lake, IA. Doors open at 6 pm and the show starts at 7 pm. Tickets are $10 in advance at surfballroom.com/boxoffice or at the door for $15. Veterans and spouses are admitted for free.

“Rock ‘n Roll is Here to Stay” is a golden oldies show that performed last October at Albert Lea’s Marion Ross Theatre to rave reviews. It features the talents of Denny & The DC Drifters, featuring veteran guitarist Denny Charnecki. Denny has played the surf multiple times and has opened for The Turtles and The Crickets. He has also played with The Coasters, Bill Haleys Comments, Herman’s Hermits, and the Four Seasons just to name a few. The DC Drifters are a talented group of artists that tour with Denny reguarly in Minnesota, Iowa and Wisconsin. The “Iowa and Minnesota All-Stars” include the talented Minneapolis vocalist Jana Anderson. Jana has recorded with Prince and toured with the likes of Fleetwood Mac, Stevie Nicks, Don Henley and others. The show also features Iowa Rock ‘n Roll Hall of Fame Inductees Terry Klein, Jerry Jones and “Rockin’” Vance Jorgensen, who will be adding their considerable talents to the ensemble.

According to Clay Norris, Executive Director of the Iowa Rock ‘n Roll Music Association, “We are so pleased and proud to be partnering with the Surf Ballroom, our statewide sponsor Humana, and several local sponsors to present Rock 4 Vets. This is intended to honor our veterans with a free show – and to bring them and the whole community a night of quality entertainment. We are looking forward to a wonderful evening at a truly historic venue.”

Laurie Lietz, Executive Director of the Surf Ballroom added, “When Clay presented an opportunity for us to partner on this show, we were thrilled to be a part of a special evening to honor our veterans. Denny & The DC drifters have played here many times, and the addition of the various Iowa and Minnesota All-Stars, we are looking forward to a great Veterans Day concert and dance.”

Rock 4 Vets is a statewide series presented by the Iowa Rock ‘n Roll Music Association featuring four other shows throughout the state: Knapp Creek Event Center, Walford, IA on Nov. 4; Roof Garden Ballroom, Arnolds Park, IA on Nov. 10; Wilson Performing Arts Center in Red Oak, IA on Nov. 11; and The Marquee in Sioux City on Nov. 12. Many thanks to Humana as the presenting sponsor for all five of the Rock 4 Vets events.

The Iowa Rock ‘n Roll Music Association exists to celebrate the legacy and inspire the future of rock ‘n roll music in Iowa. We accomplish this by honoring achievements, educating youth, and inspiring artists. Established in 1997, it is a 501(c)(3) non- profit statewide organization.