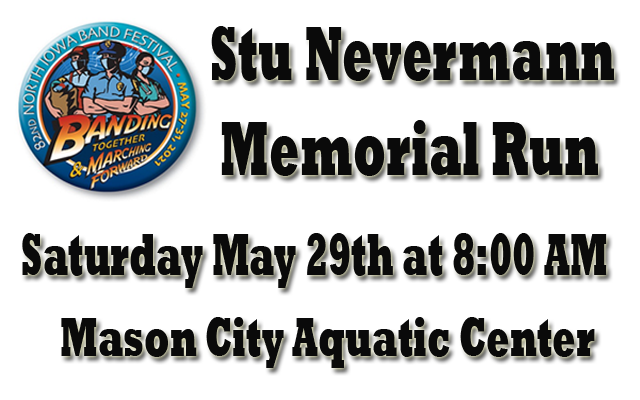 MASON CITY, IA – The 82nd North Iowa Band Festival is fast approaching, and so is the annual Stu Nevermann Memorial  Run. The 4-mile, paved, chip-timed race is scheduled for 8AM on Saturday, May 29.

https://runsignup.com/Race/IA/MasonCity/TheStuNevermannMemorialRun. In-person registration is available at packet  pick-up from 4-7PM on Friday, May 28 or on race day from 7-7:30AM.

The race will be led by team members of SPIN DEVO, a local youth bicycling development team. Walkers are welcome.  No strollers or dogs are allowed in the race.

The North Iowa Band Festival Foundation is a 501(c)3 organization with a mission to provide a weekend of wholesome  family entertainment at little or no cost to the family; to promote and celebrate the rich musical heritage of North Iowa;  and to provide an atmosphere which showcases young musicians who are becoming a part of that heritage.