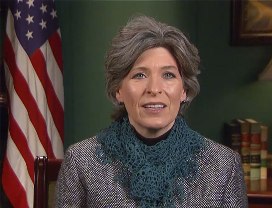 Ernst, a Republican, is the only member of Iowa’s congressional delegation who has released a statement on the operation. Ernst said Qassem Soleimani orchestrated heinous and reckless actions, including the slaughter of Americans, for far too long and he’s been brought to justice at the direction of President Trump. (Read her statement and others below.)

Democratic presidential candidates campaigning in the state are reacting to the situation. Former Vice President Joe Biden issued a statement last night, saying Trump just tossed a stick of dynamite into a tinderbox.

Minnesota Senator Amy Klobuchar said there are serious questions about the timing and potential consequences of the Administration’s decision to kill Soleimani. Vermont Senator Bernie Sanders posted a video message on Twitter this morning, restating his opposition to the war in Vietnam and the war in Iraq. Sanders said he’ll do everything he can to prevent a war in Iran.

Andrew Yang issued a series of tweets, beginning with this statement: “War with Iran is the last thing we need and against the will of the American people.”

WASHINGTON— Following reports of a successful U.S. military operation that killed Qassem Soleimani, an Iranian Major General in the Islamic Revolutionary Guard Corps and the commander of its Quds Force, U.S. Senator Joni Ernst (R-IA), a combat veteran and chairman of the Senate Armed Services Subcommittee on Emerging Threats and Capabilities, issued the following statement:

“Qassem Soleimani orchestrated heinous and reckless actions, including the slaughter of Americans, for far too long. Now, at the direction of President Trump, he has been brought to justice before he could could kill even more Americans. I applaud the work of U.S. military personnel in carrying out this mission. America, and our world, is safer because of Soleimani’s death.” 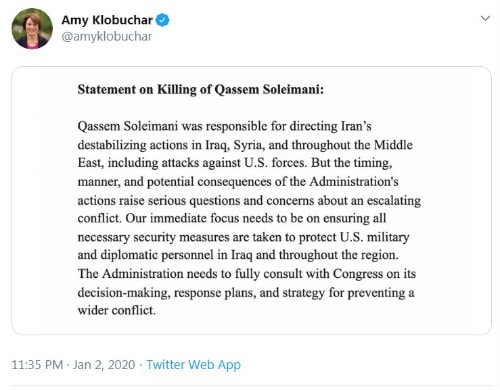