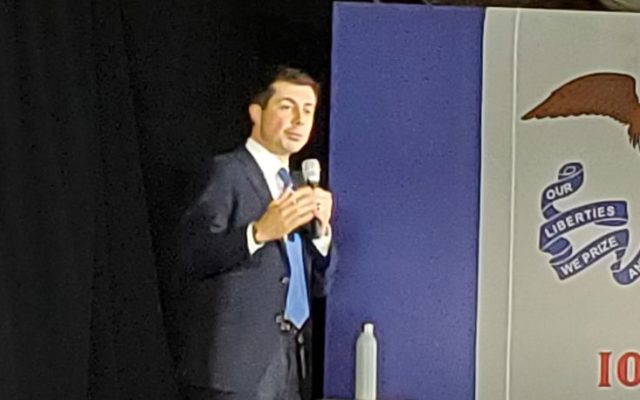 Buttigieg says the next president needs to be able to rally Americans to get things done. “We’re going to need a president determined to rise to meet those big issues and one with a plan on how to do that in a way that will actually have America more united and not divided from before. That tall order, that big job, that is what I believe the presidency is for. I’m asking for your support, and I’m running for this office, because I believe the presidency has a purpose. The purpose of the presidency is not to glorify the president, it is to empower and unify the American people to get those big things done, that’s why I’m running.”

Buttigieg says the next president has to unify and not divide Americans.  “My sense of patriotism, my love of country begins with the understanding that our country consists of people. You can’t love a country if you hate half of the people in it. We have to do better than that. We have to make sure that we lift one another up, protect one another, and if we’re serious about protecting each other, that starts right here at home.”

Buttigieg says those currently serving in the military deserve a better Commander in Chief. “Those troops deserve a president who carefully reads all of the intelligence that is submitted on important decisions, who consults with Congress on major issues of life and death, war and peace, who is in touch with our allies on whose cooperation or safety often depends, and who think through the consequences and the moves and the counter-moves that could follow from any decision that’s made in the situation room. Does anybody think that’s what this president is doing when it comes time to make those decisions?”

Buttigieg says people are being underpaid and it’s hurting the economy. “The bottom line is that most people are struggling right now to hold on to what they’ve got, let alone to get ahead, which is supposed to be that American dream. In order to do something about that, we’ve got to face the fact that not only are there very complicated, very sophisticated things happening in the economy, there’s some really simple problems, extremely simple problems like this one. People are not getting paid enough. To me that’s the number one problem in the economy, and that’s what we’ve got to fix, and we can do it by supporting workers as well as making things more affordable on the other end.”

Besides stops yesterday in Newton, Tama, and Cedar Falls, Buttigieg will be at the Wilcox Performing Arts Center in Algona this morning at 10:30 before traveling later today to Emmetsburg, Arnolds Park, Orange City and Sioux City.