ANKENY — Democratic presidential candidate Pete Buttigieg says his party must quit giving President Trump the power to change the subject with a tweet.

Buttigieg made his comments about 12 hours before President Trump’s tweets attacking a black congressman from Baltimore for not doing enough to improve what Trump described as a “dangerous and filthy place.”

According to Buttigieg, Trump’s Twitter attacks on a group of House Democrats earlier last week diverted attention from the push to raise the minimum wage, which Buttigieg supports.

Buttigieg said Democrats have to respond to Trump’s “wrong doing” and promote the party’s agenda at the same time. 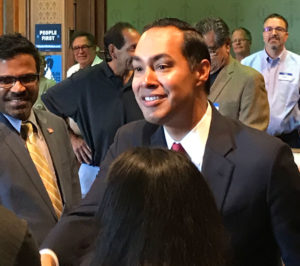 Former San Antonio Mayor Julian Castro also campaigned in the state this past weekend. He accused Trump of stoking “division, fear and bigotry” with tweets Castro described as “disgusting.”

“This is more of the race-baiting and racial-priming that this president loves to do,” Castro told reporters, “and that is wrong for this country.”

“The question that we face in this election is whether we’re going to continue to be a country that expands opportunity for everybody no matter what you look like or how much money you have or don’t have or where you live in our country — in a big city or a small town — or whether we’re going to give in to a dark call from this Administration,” Castro said.

Castro visited the Meskwaki Settlement near Tama Friday, promising to address housing, policing and economic issues in tribal communities. Buttigieg spoke to a crowd of about 900 in Ankeny Friday afternoon, outlining ideas for expanding union bargaining rights. He also said Americans in the so-called “gig economy” who work as a freelancer or contractor rather than a full-time employee should get benefits like sick leave.

“It comes down to this basic idea that a contractor is a worker and a gig is a job,” Buttigieg said.

Funeral today for marine, an Iowan, killed in Kabul