DES MOINES — The State Board of Education took the first step Wednesday in approving changes to the rules governing the use of seclusion rooms in Iowa schools.

There were concerns about three main issues when changes were first proposed, and the board voted down the first version of the rules in August to allow time for more public input without having to start from scratch.

Board of Education lawyer, Nicole Proesch, says one key point changes the language that tells teachers when they should act to put a student in a seclusion room.  “People said you have to get rid of the term serious physical injury. When you look at criminal code and when you look at IDEA, the definition for serious physical injury was loss of use of body part, dismemberment, disfigurement or possible death,” Proesch says.

Administrators told Proesch they were worried the language would keep teachers and staff from taking action. “Even when they should, because they’re going to say ‘I’m not sure if what that student is going to do is going to cause serious injury. I am going to bow out and I’m not going to step in,” Proesch says. She says they looked at several definitions and settled on using bodily injury.

Proesch says they talked with administrators and education groups about the change. “And they felt more comfortable with that because they felt that it would give teachers more room to use their judgment,” Proesch says, “And not have to second-guess whether it was going to result in some serious injury causing death.” 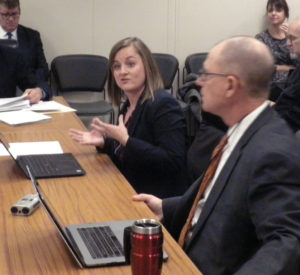 The rule for notifying parents is changed from the current requirement that parents are notified within ten minutes to let them know within an hour after the incident is over. Ed Department deputy director, David Tilley says teachers felt that ten minute rule created some issues. “Now the time clock starts once the issue is resolved and under control,” Tilley says. “That eliminated a lot of the educators worry that you’re going to put me in a position between maintaining and helping this kid — versus going and notifying a parent.”

Proesch says parents said they could not always be reached at work during the day and that created issues. The rule also says parents must be notified no later than the end of the school day.  “The original rules as they currently sit are end of school day. So, if we don’t change anything it is the end of the day. Some administrators came to us and said to leave it as it is. We’ve actually up the ante by saying an hour after it has ended,” Proesch says.

The last big change that was a point of concern in the public hearings and input was the size and type of rooms. Proesch says administrators felt two years currently given to make changes is not enough. “That’s why we extended that out, and then we also changed the room size a little bit, modified it down just so that A: it would make it a little bit easier for some schools that have rooms already. And we were also taking into consideration about some of the comments we received about how big it really needs to be and what works,” according to Proesch.

The changes on room size were included to prevent the seclusion rooms from simply being a broom closet.  “We’ve had incidents where that has occurred — and those ere the incidents that we are trying to prevent,” Proesch says. “When we look at the rules and we look at things in here that says it has to comply with heating, ventilation, lighting, accessibility, dimensions, it has to be habitable. It shouldn’t be a utility closet that has chemicals sitting on the floor.”

Tilley says the hope is that they rooms never have to be used. “The goal of crisis intervention is de-escalation and the opportunity for kids to get themselves back together,” according to Tilley. “These should if they’re used therapeutically — should be used as little as possible, as short a time as possible.”

Tilley says the total package of rules is intended to help ensure that happens in a safe manner. “Even those these were the three sticking points — it’s our perspective that there is a significant set of other changes that were made in these rules — about definitions, about training, about when seclusion and restraints should not be used,”Tilley says.

The rules now go out for more comment with the first public hearing set for January 7th from 11 a.m. until 1 p.m. in the board room of the Board of Education office in Des Moines.