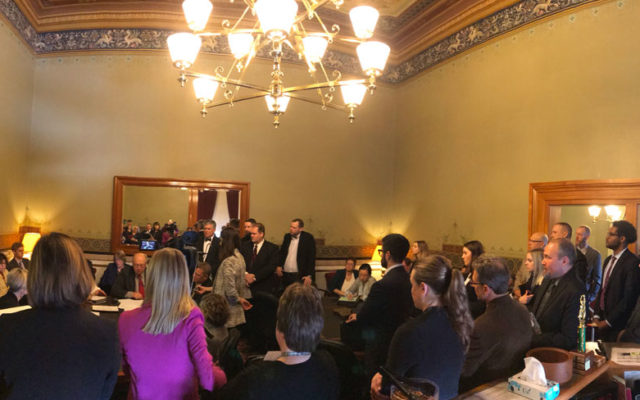 DES MOINES — Iowa Senators are considering bills to regulate the use and purchase of tobacco products.

One bill changes Iowa law to follow the new federal standard that raised the age for buying tobacco products to 21. The other would add electronic cigarettes to Iowa’s Smoke-free Air Act. It means “vaping” in public places like restaurants, office buildings and schools would be banned.

“It’s a good first step in addressing the national vaping epidemic among teens and youth,” Chaney Yeast, a social worker from Blank Children’s Hospital in Des Moines, said during a subcommittee hearing.

“Anytime you compare cigarette smoke with vapor smoke, there’s a disconnect,” said Seth Peters, owner of The Vaped Ape in Carroll. “There is no science indicating that vapor causes anywhere near the damage of cigarette smoke.”

Jim Obradovich, a lobbyist for the Iowa Nurses Association and Iowa School Nurses, told senators the Centers for Disease Control has concluded bystanders can breathe in the aerosols from someone else’s e-cigarette.

“We think that’s very dangerous and we applaud you moving this forward,” Obradovich said.

Doug Struyk, a lobbyist for the American Cancer Society, said the group supports the ban on vaping in public, but wants to see the bill go further and ban smoking pot in public, too.

“While we all sitting in the room today may not believe that marijuana will be legalized in the State of Iowa, while we’re doing this we think we should identify that,” Stryk said, “and include it as something that is a prohibited activity.”

“If you’re the cop on the beat who comes into a restaurant and you see people vaping and you can’t tell them to quit, but then somebody else starts lighting up cigarettes, how are you going to enforce the ‘Smoke-free Air Act?” Quirmbach asked. “The patrons are going to say: ‘These vapers can vape. Why can’t I smoke?’”

Senator Mark Segebart of Vail said he’s been concerned about illnesses and deaths related to vaping.

“There’s chemicals that are released from what I’ve read, during the vaping process that not necessarily happens when you smoke a cigarette,” Segebart said.

The proposal is now eligible for debate in a senate committee. Another group of senators are working on legislation to make Iowa law match the federal change that moved the legal age for purchasing tobacco products to 21. Dave Scott, a lobbyist for Phillip Morris, said the cigarette-maker supports the move and he warned the state cannot enforce the new “Tobacco 21” standard.

“If a 19-year-old were to go in and purchase tobacco products,” he said, “they would be legal under Iowa law currently.”

The State of Iowa also stands to forfeit some federal grant money if it fails to raise the tobacco purchasing age to 21. A key senator indicated it’ll be a couple of weeks before the issue is debated in a senate committee.