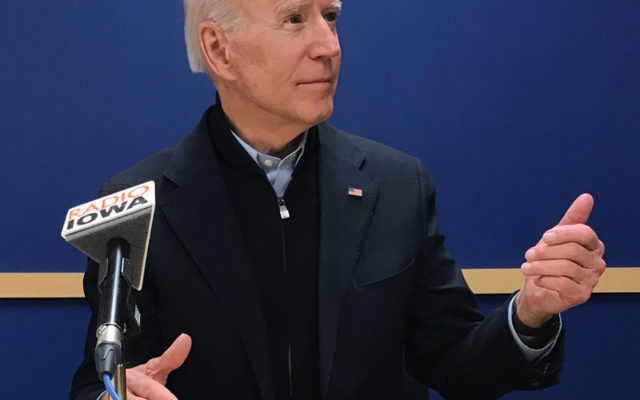 “He’s the most electable,” Miller told a crowd in Ankeny Saturday night.

“I think it’s going to be close, but I feel good,” Biden said.

Biden said he’s not surprised so many Iowans are undecided this close the Caucuses.

“You fly-speck everything out here,” Biden said.

Biden suggested this 2020 race is similar to 2004. That’s when John Kerry wound up being the consensus choice in the closing days of that Caucus season.

“I really believe that there are a different set of assets that are required in different elections,” Biden said. “I think what people know what we have to do. We can’t just beat Trump. We have to take back the Senate and keep the House and increase the numbers.”

Without prompting, Biden responded to critics who say he will lose the party’s liberal wing.

“If I get elected and do what I’m talking about, it’ll go down as one of the most progressive administrations in history,” Biden said. “The question is: ‘Who can get something done?’”

Biden, who spoke with Radio Iowa before the impeachment trial resumed, suggested whatever happens this week will have little to no effect on Caucus Night.

“So far it hasn’t. I mean they’ve beaten the living hell out of me…I’m not saying this is going to be fun or whatever,” Biden said. “But you know whomever the nominee is, this administration is going to go after them lying like the devil.”

Biden has occasionally mentioned to Iowa audiences that February 3 would have been his late son 51st birthday. The former vice president sometimes says Beau Biden, who died of brain cancer, should be the one running for president. Biden told Radio Iowa his son’s political advice was always “to remember homebase.”

“Don’t be intimidated by the moment. Don’t want the office more than you want your integrity. Don’t do anything that you are going to regret,” Biden said. “That’s one of the things I worry about some of my friends in the Republican Party on this impeachment. I don’t think they understand their children, grandchildren and great grandchildren are going to read about this.”