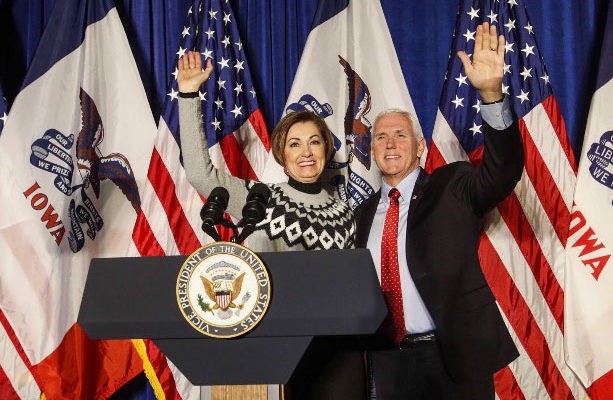 “I really do believe Democrats are trying to run down this president ’cause they know they can’t run against this president,” Pence said, to cheers.

Pence called the impeachment a partisan exercise. Pence began his remarks by listing campaign promises Trump has followed through on as president.

“As we stand here today President Trump has signed the largest increase in our national defense since the days of Ronald Reagan,” Pence said. “We’re finally giving our soldiers, sailors, airmen, marines and Coast Guard the resources and the support they need to accomplish their mission and defend this nation.”

A man in the crowd yelled the Marine Corps’ “oorah” and Pence replied: “That’s worth a couple of oorahs.”

“As president of the senate under the constitution it was my great honor to cast the tie-breaking vote for legislation that allowed states all across America to de-fund Planned Parenthood and President Donald Trump signed the bill,” Pence said, to loud cheers.

Pence also cited the 180 conservative judges Trump has appointed to the courts since he took office in 2017. Republican Governor Kim Reynolds introduced the vice president at events in Sioux City and Council Bluffs.