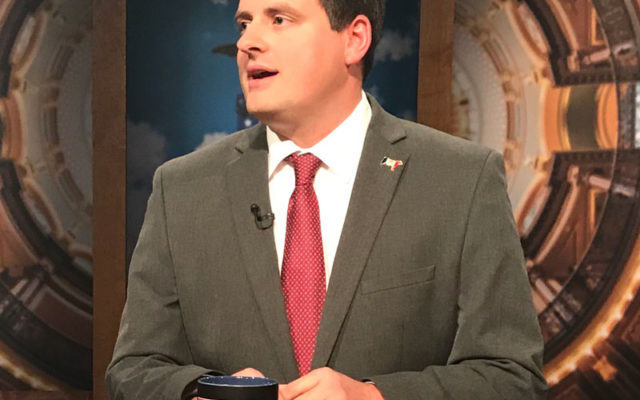 DES MOINES — The opening day of the 2020 Iowa legislature features what the Iowa GOP’s chairman calls “a new generation of leadership” in the Iowa House. Thirty-six-year-old Pat Grassley of New Hartford was installed as House Speaker today.

“This session I want to show Iowans that we are not like our counterparts in Washington, D.C., that when there are opportunities to work together, we actually do work together,” said Grassley, who was chosen by his peers this fall to replace then-House Speaker Linda Upmeyer, who announced she would not seek reelection in 2020.

Grassley joked during his remarks that farmer-legislators like him will be anxious to start planting this spring and that may influence how long the 2020 legislative session lasts. Grassley closed with the message he delivered at the start.

“Let’s make sure that we show Iowans that we are not like Washington, D.C. (with) less partisan games, less political theater, more results for Iowans,” Grassley said. “Let’s strengthen Iowa’s workforce and improve our education system. Let’s make health care more affordable and pass a responsible budget that puts the taxpayers first.”

U.S. Senator Chuck Grassley and his wife, Barbara, were in Des Moines to witness their grandson be elected House Speaker.

“I’m very proud of Pat not only for being selected speaker, but I’ve seen him grow over the years that he first approach me 14 years ago saying he’d like to run for the state house of representatives,” Senator Grassley said this morning. “I don’t recall a single political conversation I had with him before that point.”

Senator Grassley, who is 86 years old, said he hasn’t decided whether he’ll seek re-election in 2022 — and he told reporters his grandson is not being groomed to run for the seat.

“That’s up to the people of Iowa,” Senator Grassley said. “And I never hear him talk about running for the United States Senate.”

Ten members of the Grassley family were in Des Moines for the event and Pat Grassley took the oath to serve as Iowa House Speaker using a New Testament that was a gift to his grandfather.

“It says here that I got this in the Cedar Bible Baptist Church of North Cedar, that’d be part of Cedar Falls,” Grassley said, flipping the tome open and showing reporters the inscription on the inside cover. “I don’t know the exact Sunday that I spoke there, but I always preach on 2 Corinthians 5:17-21, being ambassadors for Jesus Christ.”

Matt Windschitl, a 36-year-old from Missouri Valley, is now the majority leader in the Iowa House.

“We’ve been in the majority since 2011,” Windschitl said early this morning at a GOP fundraiser. “What we’re going to do this session is continue to give Iowans every reason to give us that majority back in the November elections. It’s as simple as that.”