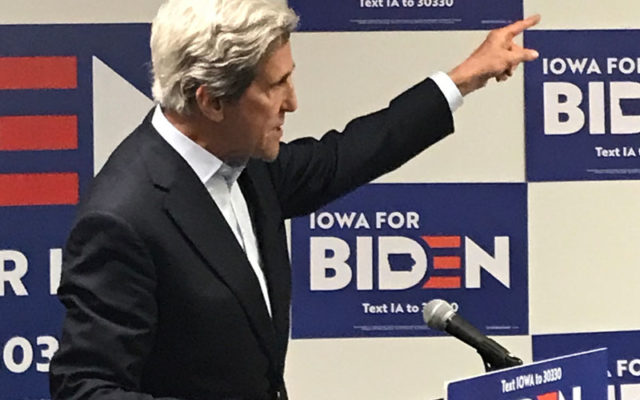 MASON CITY — The winner of Iowa’s 2004 Caucuses is traveling the state this week, campaigning for one of the candidates seeking the Democratic Party’s 2020 presidential nomination.

John Kerry is reminiscing about the campaign he ran here 16 years ago. “I had the best time criss-crossing this state, measuring my life by the height of your corn…I spent New Year’s Eve in Sioux City with my 300 new best friends, celebrating the New Year,” Kerry said this afternoon.

Kerry was trailing in the polls in December of 2003, but wound up winning with 38 percent of the delegates selected in the 2004 Caucuses, which were held on January 19th that year.

“We had a hell of a good time, folks, and nothing was better than turning the tide in the Caucuses ” Kerry said to a crowd in a Biden campaign office near the Des Moines airport. “And going on to win Wisconsin and Michigan and Pennsylvania and coming within half a football stadium of winning the presidency.”

Kerry lost the state of Ohio in the General Election by about 60,000 votes. Kerry’s on a bus tour of Iowa, traveling with Joe Biden’s sister and a few other Biden supporters from other states.

“I actually thought about running and I’m not — because Joe is,” Kerry said, “and because I believe in his ability to be able to pull the country together, to win those critical states.”

Kerry, who represented Massachusetts in the U.S. Senate for 28 years, served as U.S. Secretary of State during President Obama’s second term. He told the crowd in Des Moines late Wednesday afternoon President Trump’s showdown with Iran is reckless, impulsive and has put us at odds with our closest allies.

“The more I see of what is not happening in the world measured against what should be happening, the more I know we need to respect experience and value somebody like Joe Biden,” Kerry said, to applause.

Kerry will be at the Kossuth County Agricultural and Motorsports Museum in Algona at 2:45 this afternoon. His Mason City stop will be at the Biden for President office at 105 South Delaware starting at 5:45. Kerry will make more stops in eastern Iowa on Friday, Saturday and Sunday.